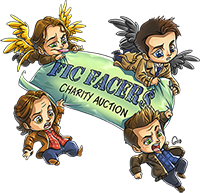 Welcome to the home of Fic Facer$ and our annual auction fundraiser for Random Acts.

ABO/Omegaverse: Alpha, Beta, Omega. A world-building trope based loosely on wolves. The alpha is usually hyper-masculine, the beta is a “normal” human, and the omega is usually submissive and can be impregnated by the alpha, regardless of primary (M/F) or binary gender. Lycanthropy is sometimes involved.Ace: Exploration of a character or characters who are asexual.

ABO Dual Sexed: Character(s) has a double-sexed orientation, either by primary or secondary gender.

Angst: This means a story will have some moments that may cause tension and sorrow.

BROTP: A platonic, BRotherly One True Pair, a bromance.

Canon: The story strictly according to what has happened on the broadcast show.

Canon-Compliant: Follows the story of the show on TV.

Casabriel: A romantic relationship between Castiel and Gabriel.

Casamichael: A romantic relationship between Castiel and Michael.

Case Fic: The story concerns a mystery or problem they have to solve, usually with a specific client.

Character X: You or someone you want it to be in the story.

Chibi: A Japanese slang word describing something short (a thing, animal, or person). The term is widely used in Japan to describe a specific style of caricature where characters are drawn in an exaggerated way, usually with huge eyes and tiny bodies. Frankly, it’s adorable.

Crack: A silly tale (as in, someone wrote this while on crack)

Crobby: Crowley and Bobby in a romance

Crossover (X-over): This means the story will involve Supernatural and some other show or movie or book or whatever, such as Star Trek or The Golden Compass.

Destiel: Dean and Castiel in a romantic relationship.

Domestic (trope): Seeing the characters at home, puttering around, making pancakes, that sort of thing.

Fuck-or-Die: Two characters who wouldn’t otherwise sleep together have to get it on or die from internal or external sources (aka, Aliens Made Them Do It).

G Rating: Completely family friendly, no matter what age. No violence, sex, maybe a kiss, but probably on the cheek.

Gender Bend: Maintaining the character while changing their gender to serve the story.

Hanstiel: Hannah and Castiel in a romantic relationship.

H/C: Hurt/Comfort. Someone gets hurt. Someone comforts them. Often pre-slash, but not always.

Het: A romantic/sexual pairing of a heterosexual nature.

J2: Jensen Ackles and Jared Padalecki, in many forms.

Kitten: The boys find/adopt a kitten.

Metafiction: A story that self-consciously alludes to the artificiality or literariness of a work by parodying or departing from conventions, like breaking the fourth wall and having the actors suddenly become their characters.

Mooseley: A romantic relationship between Sam and Crowley.

Mpreg: A male character is pregnant.

NC-17 Rating: No children under 17. Whatever the hell you wanna do.

Non-Con: Non-consensual sex. This may be tame or extreme.

OFC: Original Female Character not in the show

OMC: Original Male Character not in the show

Omegaverse/ABO: Alpha, Beta, Omega. A world-building trope based loosely on wolves. The alpha is usually hyper-masculine, the beta is a “normal” human, and the omega is usually submissive and can be impregnated by the alpha, regardless of primary (M/F) or binary gender. Lycanthropy is sometimes involved.Ace: Exploration of a character or characters who are asexual.

ONBC: Original Non-Binary Character not in the show

NSFW: Not Safe For Work. This is a fic or image that you don’t want your boss or coworkers to glimpse.

PG Rating: No nudity, cussing or other than cartoonish violence. May only hint at adult themes.

PG-13 Rating: Characters can fight each other a bit and kiss on the lips. Swear words are limited to hell, damn, and so on. This rating allows “ass,” but nothing going up it or down it. One “fuck” or “prick,” but no more. (Non-Americans won’t understand the weirdness about Americans and cuss words, but then, I don’t either.)

RPF: Real People Fiction. Such stories deal with the actors in an imagined scenario.

R Rating: Extremely suggestive situations and some nudity (boob, butt). But no specific “stick that there.” (Hey, I don’t make these stupid rules.) Swear all you like. Heavy violence OK, but not drowning in gore.

Reader X/Reader-verse: A story where the reader is part of the action. May be done as first person or with inserts. (Y/N stands for Your Name.)

Sabriel/Sambriel: A romance between Sam and Gabriel.

Sam Ships It: Sam wants Dean and Castiel to get together.

Sastiel Dads: Sam and Castiel in a parental role with Jack.

SFW: Safe For Work. Your boss and coworkers can see this, and you don’t care.

Side Pairing: An additional romantic couple in the sub-plot.

Slash: A romantic/sexual pairing of a homosexual nature.

Snowed In: This doesn’t have to be literal, but the idea is that two or more people are trapped in a space and have to interact.

Soul Bond: This genre deals with the idea that people are destined to be each other one’s true love from birth. Usually, some sort of mark shows up that the characters must match or recognize.

Switch: Roles are switched in various ways. Top to bottom, omega to alpha, whatever.

Reverse-verse: AU in which characters and things swap characteristics.

Trope: A common theme or device in storytelling.

Vector Art: This is created using illustration software programs such as Adobe Illustrator or Corel Draw. These programs use mathematic equations and geometric primitives (points, lines, and shapes) to create art that is clean, camera ready, and can be scaled infinitely, without any loss of quality or fidelity.

Wayward Women/Wayward Daughters: The group of women who were almost spun off into their own show. See the episode “Wayward Sisters.”

Weechesters: A story when the brothers are young.

WinCasWin: Sam and Castiel and Dean and Castiel, but not Sam and Dean.

Wincest: Sam and Dean in a romantic relationship.

Wings (Wingfic, Wingkink): One or more characters has wings, and they’re often involved in affectionate touching/grooming. There’s an excellent video on the trope here. 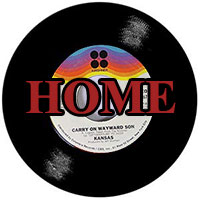 Want to come play with us?